I have been honoured to have been awarded the Cross of Merit of the Polish Society of War Veterans and Former Political Prisoners (Związek Kombatantów RP i Byłych Więźniów Politycznych). The ZKRPiBWP is an official Polish Veterans association and the largest such, with 43 regional chapters across Poland as well as 2364 clubs. Membership may be granted to any Polish citizen who was an active duty member of the Polish military (including partisan, self-defence units, and Polish Underground State) in or during the war, campaign, or conflict, as well as to all survivors of German concentration camps and pro-Soviet political imprisonment in the communist era. The constitution also requires members to have not been discharged under any conditions other than honourable. 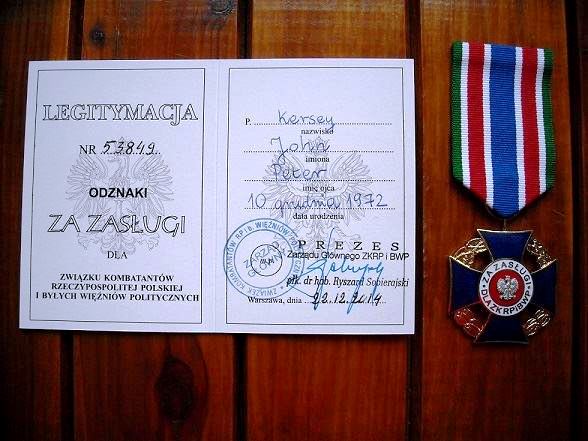 Historian, musician and educationalist.
View all posts by johnkersey →
This entry was posted in Honours and awards. Bookmark the permalink.