Having been baptised in the Church of England, I was aware that I had a vocation to the ordained ministry from young adulthood, but was also aware that the changes affecting the Church of England meant that I was increasingly uncomfortable with what it was coming to represent. Before ordination, I spent eighteen years undertaking lay work as a musician within a number of Christian denominations, becoming familiar with issues of liturgy and parish life as well as developing experience in a number of pastoral settings, and coming to accept the conclusion that my vocation was to serve as a non-stipendiary minister within a traditionalist setting.

Working with a small group of Christians meeting for worship in Central and South London, I first received ministerial commissioning in 2002 and subsequently prepared for my formal ordination in 2006. This event brought me into active contact with a number of the churches in the Continuing Anglican, Old Catholic and Liberal Catholic traditions. It also brought me into the communion of the Apostolic Episcopal Church (AEC), the American-founded church in which I continue to serve today, and in which I would subsequently hold senior office.

Today, my ministerial work is organized under the aegis of the Abbey-Principality of San Luigi, an international ecumenical foundation. The Abbey-Principality has responsibility for a number of smaller churches and religious orders that derive from Western Orthodox, Old Catholic, and Continuing Anglican missions. These include the Catholicate of the West and the Apostolic Episcopal Church. The Abbey-Principality was in union with the Roman Catholic Church until 1929. Since that time, it has been in partial or imperfect communion with the Holy See (see Catechism of the Catholic Church (1992), 838 and 1271), because although it remains Catholic in faith and practice and preserves valid sacraments, as a body faithful to the Tradition of the Church it is not under papal jurisdiction. Nevertheless, the Abbey-Principality holds the office of the Pope in the highest regard and looks for ecumenical unity under his leadership.

I have always believed in a view of the Christian ministry whereby the Orthodox and Catholic Faith is maintained alongside a broad and enquiring intellectual approach – a tradition found in the best of Anglicanism. The way that this is expressed in my ministry is through the phrase Orthodox in Faith, Catholic in Practice, Anglican in Outlook. As such, I am strongly opposed to those currents that might be seen as narrowly ascetic or Puritanical, and for many years I have taken an active interest in the development of the Western esoteric tradition and its reconciliation with expressions of Catholicism and Western Orthodoxy.

Over the years, I have had the opportunity to undertake a very varied ministry which has included weddings, funerals and other church services, often working ecumenically alongside clergy in the Anglican, Old Roman Catholic and Liberal Catholic churches. Today, I support and manage a small but dedicated group of clergy and laity that is spread over several continents. Following a longstanding tradition, I also see my work as a teacher and educationalist as a form of ministry.

I have also developed significant interests in the history and ecclesiology of the smaller sacramental churches that emerged in the late nineteenth and early twentieth-century, and as well as research and writing on this subject have responsibility for an extensive collection of related rare books, manuscripts and liturgical items. 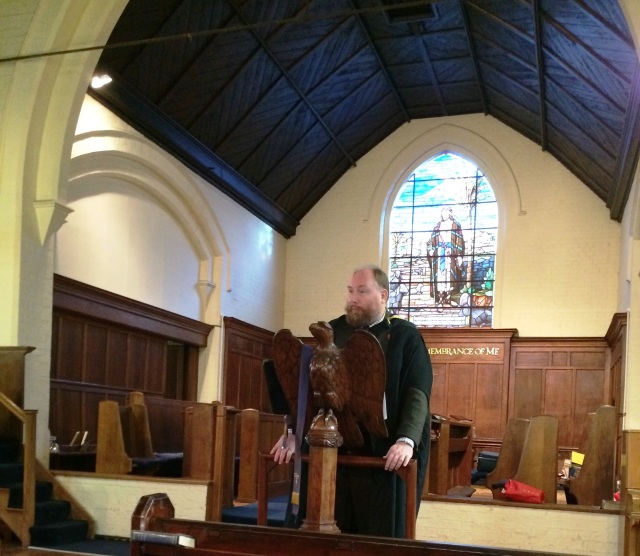 In 2008, I was asked to take on responsibility for continuing the legacy of the Ancient Catholic Church and its founder Archbishop Harold Nicholson. This church had worshipped in London for almost sixty years before the closure of its only remaining place of worship, the Cathedral Church of the Good Shepherd in Clapton, north London. As part of what proved to be a complex and difficult re-organization I helped establish a new church, the Liberal Catholic Apostolic Church, to continue this legacy, and headed this body for the first year of its existence. A further re-organization in 2009 saw the Liberal Catholic Apostolic Church move closer to a theologically liberal position while I continued the Nicholson legacy separately as part of my ministry within the Apostolic Episcopal Church. In due course, I would also establish an ekklesia within the AEC called the Ecclesia Apostolica Divinorum Mysteriorum that explored some of the currents from the Nicholson ministry in a wider context of Western esoteric thought. As successor of the late Archbishop George Boyer, I was formally enthroned as Archbishop of Great Britain in the Apostolic Episcopal Church and Rector Pro-Provincial of Canterbury in the Order of Corporate Reunion at a service in London in November 2008.

In August 2011, I was elected by the Supreme Council of San Luigi as Archbishop and Prince-Abbot of San Luigi (as Edmond III). San Luigi is both a Western Orthodox and Old Catholic jurisdiction in its own right and a federation of other historic communions.

Having been appointed Co-Adjutor with right of succession to the Primate of the Apostolic Episcopal Church, Archbishop Francis C. Spataro, in July 2014, I succeeded as the fifth Presiding Bishop and Primate of the Apostolic Episcopal Church, and as head of the Catholicate of the West and dependent communions, on Archbishop Spataro’s retirement on 5 February 2015. The Catholicate of the West subsequently became the ecumenical body under which the missions of the Abbey-Principality of San Luigi are organized.

Additional offices that I hold, and that are now organized under the Catholicate of the West, include Prefect of Great Britain of the Confraternitas Oecumenica Sancti Sepulcri Hierosolymitani (2012-) and, as successor of my consecrator, the late Archbishop Dom Phillip Kemp, Primate and Titular Archbishop of Elmham of the Old Catholic Church of Great Britain (2012-). In March 2015, I succeeded my adoptive father, the late Prince-Archbishop Kermit William de Polanie-Patrikios, as Ecclesiast of All Byelorussia in the Byelorussian Patriarchate of St Andrew the First-Called Apostle and head of the Apostolate of the Holy Wisdom.

I have served as principal consecrator for two bishops: Charles Mugleston and Alistair Bate, both on 15 August 2007. Bishop Mugleston continues to be in intercommunion with my church, while Bishop Bate ceased to be in communion after 31 May 2011. In addition, I have assisted as a co-consecrator and given additional commissioning sub conditione to several bishops.

Academic and related interests in the Church

My wide academic interests in the Church centre upon the history and ecclesiology of the smaller reactionary Orthodox, Old Catholic and Continuing Anglican churches in the nineteenth and twentieth-centuries, and on issues of sacramental validity, Apostolic Succession, jurisdiction and canon law as these apply to the smaller communions. Several book publications and both published and unpublished research papers testify to my extensive engagement with these issues.

I have responsibility for the custody of a major archive of documents and artefacts concerning the history of my own and other related communions, including a number of unique and valuable items, and I am regularly consulted by researchers and others seeking information on the independent sacramental movement and related bodies. Under my aegis, a number of historic items, including several once belonging to Archbishop Joseph-René Vilatte (1854-1929) continue in liturgical use today. I am also interested in the practical challenges of ministry, purpose and effective episcopal management within small, geographically disparate and theologically diffuse communions, and with ensuring that their representation in the wider world is not confined to the pejorative academic ghetto of  “new religious movements”.