I have been honoured by the Polish Collegium Heraldicum Concordiae. The CHC was founded in 2009 to promote traditional and conservative values within society.

The Medal “Pro Probitas” was instituted in 2010 and is awarded in three classes: gold, silver and bronze. It is awarded to those who have promoted conservative values. The obverse design of the medal depicts Adam Jerzy Czartoryski (1770-1861), while the reverse bears a quotation “CONVENIT DIMICARE PRO LEGIBUS, PRO LIBERTATE, PRO PATRIA” (it is fitting to fight in defense of rights, freedoms and country) taken from “Tusculan Disputations” by Marcus Tullius Cicero. The ribbon depicts the national colours of Poland and of France.

I have received the Medal “Pro Probitas” in gold (Class I) which is the highest award of the CHC. 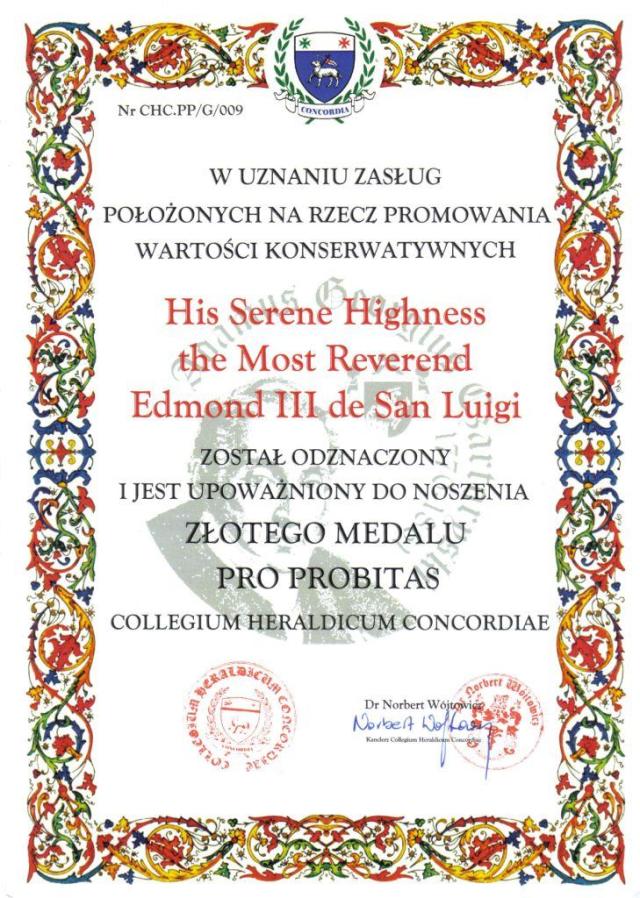 Additionally, I have received the CHC Medal commemorating the hundredth anniversary of the birth of the late Archduke Otto von Hapsburg. The reverse of the medal depicts a quotation from Vergil, “Semper honoris nomenque laudesque manebunt tuum” (Your honour, name and glory will remain forever) 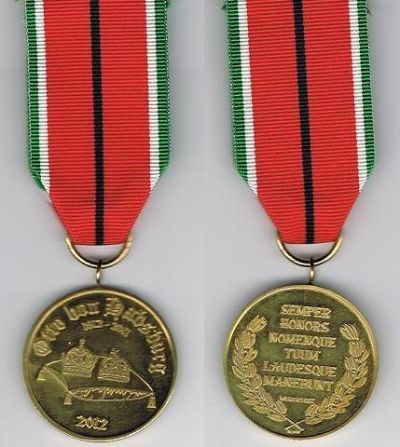 The chairman of the CHC is Dr Norbert Wojtewicz, who is a Knight Officer of the Order of the Crown of Thorns. Dr Wojtewicz, who earned his first two degrees from the Papal Theological Faculty in Wroclaw and his PhD from the University of Wroclaw, is the former Keeper of the Laws of the Association of Polish Monarchists. Among his many chivalric offices, he is Grand Herald and member of the Grand Chapter of the Order of Saint Stanislaus, and is author of the official history of the Order. He is photographed below with the late Prince-Bishop Juliusz Nowina-Sokolnicki, Grand Master of the Order of Saint Stanislaus, who was briefly Assistant Bishop to me in my capacity as Archbishop of Great Britain in the Apostolic Episcopal Church.