Following my proposal by two Past Masters of the Worshipful Company of Musicians, the late John Iles senior and junior, I was admitted to the Freedom of the Company in July 2000. 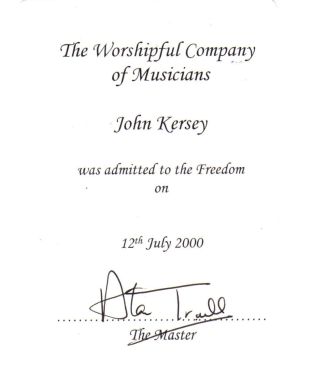 Shortly afterwards, I was admitted to the Freedom of the City of London. 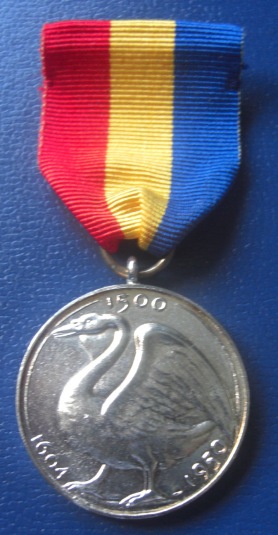 At the time of my admission in 2000, the system was that the incoming candidate was admitted as a Freeman of the Company and then could progress to clothing with the Livery after two years, in both cases on payment of a Fine which was a life subscription. As of the early years of the century, this was a reasonably substantial sum that was not greatly different from the sums requested from other learned societies for life membership. I was explicitly told that once the Livery Fine was paid no further financial input was required, unless one wished to attend formal events which were paid for on an individual basis.

The Company decided to introduce quarterage (an annual subscription) in 2003, and this became compulsory for new members and was also payable by members of the Court. The subscription was not inconsiderable and has since increased. Initially, it was not made retrospective, but around 2013 it was decided that those Liverymen who did not elect to pay it (having been admitted under the previous life subscription arrangements) would be designated as “dormant” and deprived of most of the privileges of membership, although they would not (and indeed could not legally) be removed from the Livery.

My position was and is that I had entered the Company on terms that would provide life membership and with which I had complied fully, and that in effect the Company had breached this agreement by attempting to change those terms retrospectively. At the time of my admission, the Company concentrated on specific areas within music which were also interests of mine – notably jazz and brass bands. It seemed to me a friendly organization with a welcome amateur spirit, and since I greatly like and wished to encourage amateur music-making I felt a synergy with its enthusiasms and was happy to volunteer my services should they have been required. I attended several of its informal lunches and at one of these met the late Dr Leonard Henderson, who would become a significant influence on my work.

The lunches ceased fairly early on, and the Company was overtaken by an ethos of competition with the other Livery Companies and a quest for status within the musical establishment that meant that the focus became less upon the membership as a body of professional and amateur musicians and more upon the membership becoming a source of financial input and donation. I did not welcome this change and had never seen my membership in these terms. In my view, it was a development that would remodel the Company as a club for the affluent and would as such exclude the majority of musicians. What it certainly did was destroy the amateur ethos that had formerly prevailed, and I felt this was greatly regrettable.

Accordingly, I remain a Liveryman today, but take no part in (nor endorse) the activities of the Company. I continue to hope that at some point in the future there may be a change of heart regarding the prevailing direction of the Company and its approach to the membership.